Well it certainly been a week, I did the mini runner if you look at earlier post you see that I did the one strip which was done at quilting group but at home I have made this larger & the photo is of it finished.
I have received 2 of the 3 books I ordered plus some more 1930s style fabric also some new applique CD which is for the EQ program I haven't as yet loaded them on.
Reason I haven't loaded them is that I have major problems with computer & a virus so have had to work on it & am still loading programs back on I know that one program won't load but this is not my Quilting program but Office 2000 I have Works but office has word & I need that to be on for a spell checker on Outlook Express strange that both are microsoft yet OE needs word yet it don't come up with it they use works
Well I guess I better get back to loading programs on computer 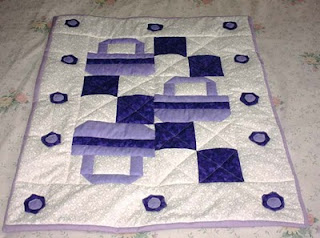 Posted by Searchfamilies at 11:45 4 comments:

What a Lovely Package 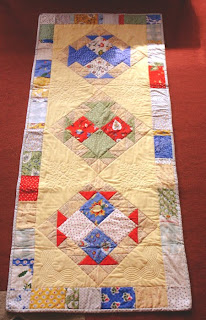 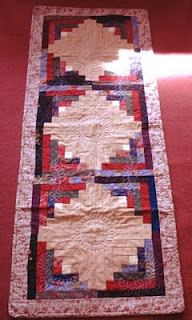 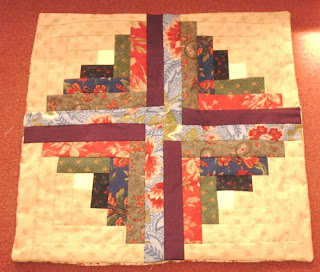 Posted by Searchfamilies at 15:19 6 comments:

Had a good week-end, On Saturday was my quilting group & we was to do a mini table runner the block is the basket with a 4 patch block in between the two baskets which I have done as you see by the photo.
It not finished as I would like to do it bigger so I have thought of doing 2 four patch blocks & 1 basket & then put the 4 patch block next to the baskets & the basket next to the 4 patch so hope to do that later today after doing some boring jobs such as housework lol.
I also posted photos of the Sunbonnet Sue that will go with my blocks for the quilt I have only take a photo of 6 as the other 6 are the same so you see the ones I have plus a closer up one, so I have 2 of each colour to go with the blocks in previous post.
Sunday was a beautiful day & DH & me went off to some gardening centres well have to take him out occassionally lol while out we had lunch out had a lovely roast beef dinner I had no potatoes just other vegetables it came also with a apple crumble for pudding & we had a soft cold drink all for a very good price.
Anyway we are limited for space as we don't really have a back garden as such & DH likes to grow his own vegetables & he wanted a trough or a raised bed type thing we saw one that would do but was expensive anyway at this gardening centre they sell fish ect & they had some holding ponds which are like very large sinks or mini baths so I suggested what about them & he looked & we got 2 of them they will be idea as they are fibreglass they won't rot unlike wood plus for the 2 of them they cost less than one of the planters which we saw & much less than the large raised bed & we have more room than if we got either of them, so I do come up with some good ideas for him occassionally lol
He will be attempting to grow Celeriac which we love, DH seems to be at his happiest when he pottering around outside he hates being couped up inside & if he don't go out he can get grumpy lol also as he says he in a lot of pain & if he don't keep moving he will seize up & that he won't be able to do anything so he keeps on plus if your busy you can work through the pain as your mind is on other things.
Today is a nice day weather wise but it will be unsettled with rain during the week here or so they say so will have to see how it goes.
On a previous post someone asked if I had to pay duty on my 1930s fabric well no as while I bought 50 FQs it came in two packages so value was split so it was under what I am allow.
Please do remember if you are on a No Reply or as Annon then I can't e-mail you back with a thank you or further comments I do reply to all postings. 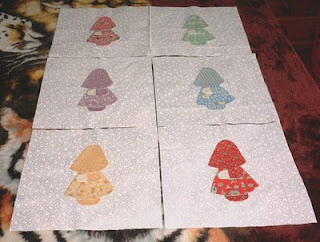 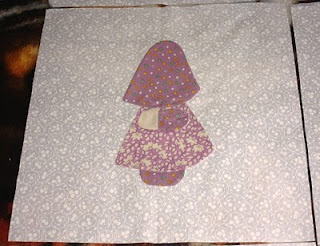 Posted by Searchfamilies at 11:05 5 comments: 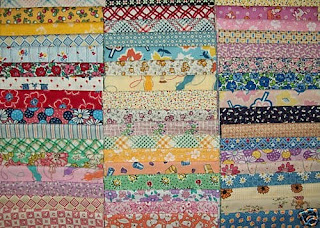 Posted by Searchfamilies at 09:17 9 comments:

I have finished the last of the pattern blocks which now only leaves the 12 Sunbonnet Sue to do have to cut the background fabric for those then put the SS on to them.
The blocks I just done I taken a photo of all of them in one then a closer one of just one of the 5 I have done.
In the other photos you will see the Aran Sweater I been working on i done a full shot & a closer one, am rather pleased with it & it took around 3 weeks to do which again am rather pleased with. 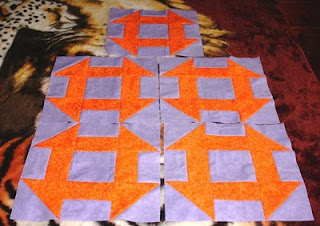 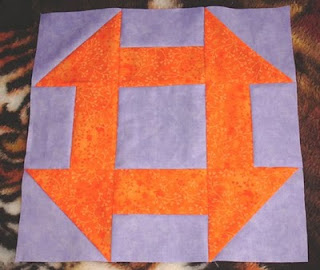 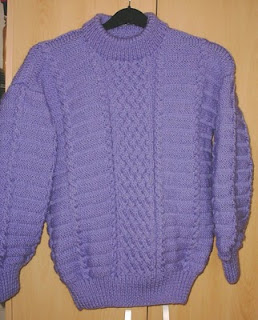 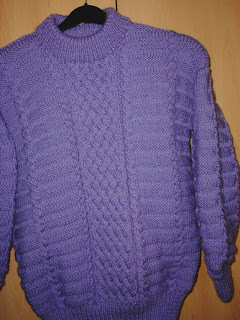 Posted by Searchfamilies at 11:09 4 comments:

Top of the Morning to You, Happy St Patrick's Day & may the Luck of the Irish be with you.
Well yesterday I had my friend over & we attempted our first go at some Flying Geese & they went quite well am pleased with them we did it the Eleanor Burns way as I have some of her Quilt in a Day Templates for Flying Geese so we did that.
After my friend left I managed to do the 4 blocks I need for my quilt in this pattern & colours just right with today being St Paddy's day lol
These have come out really well & are even bright than the photo shows
I have one more pattern block to do & have to do 5 of those, pieces cut but have to sew the triangles cut & press then start to assemble them once that all done I will cut the background fabric for my Sunbonnet Sues so am hope that I will be able to start on that very shortly, Friday I am not sure what my friend & I will try as we said we want to try new things if we not working on a project, I do also want to see if I can do a block say a star that uses the flying geese method in it just so I can say I done it.
On my Knitting I will have the sleeve finished today & will be able to start to sew it up so that will be finished & ready to post by end of the week. 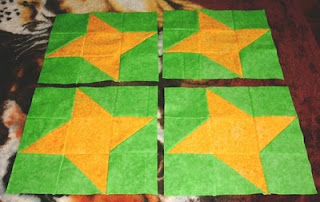 Posted by Searchfamilies at 12:23 5 comments:

I have finally started the blocks for my quilt I will be doing 3 different blocks plus Sunbonnet Sue on a WoW background.
This is a photo of the first set of blocks, the other 2 blocks will be bright as well & the SS is done in 1930s fabric, I can't take credit for doing them as I bought them ready done just have to press them on to fabric & join the pieces that will be the last part as I want to make sure all the blocks come out the correct size before I start cutting the backing fabric.
I am using bright light colours for the quilt I will be using 3 different colours of the same range for the borders, & the blocks most are in the same range but different colours only had to add in another range for 2 of them but again where possible same range you see as I progress further.
As I mention about the Eleanor Burns books well I did order some books I ordered Egg Money Quilts, Orions Star & Sunbonnet Sue book well I may as well learn how to do it myself lol they should be here between next week & just after Easter.
I have finished the 1st sleeve on the Aran sweater & working on the 2nd I have already done the neckband so once sleeve is done just have to then sewn them in & sew up. 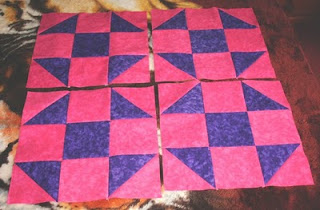 Posted by Searchfamilies at 09:58 3 comments: 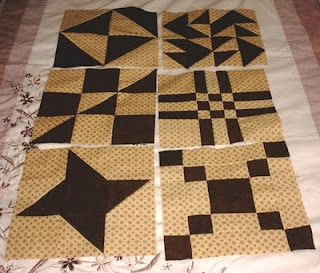 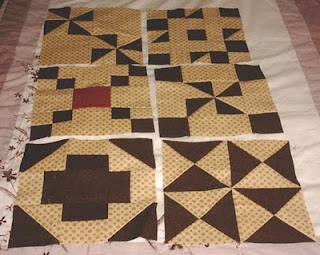 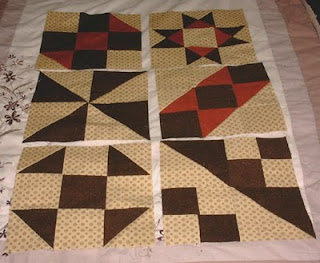 Posted by Searchfamilies at 10:09 5 comments:

Here is your Angel for March, they say in like a lion out like lamb well we will have to wait to see which way March will go but I trust that it will be a good month for you & that we will start to see signs of spring & all that can bring.
So may the Angel of March be with you throughout the month & watch over you 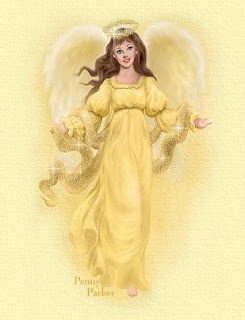 Angel Of March
~In testament to richness
With elegance sublime
This angel of the month of March
Her heart be so inclined
To share her wealth with those of you
Who need a special hand
She casts her coins upon the land
This gift will always land
Within your heart you capture gold
The kind you always seek
These are the coins she spreads about
To make you rich with peace
To find a coin that falls from sky
To see it glisten bright
Just pick it up to make you rich
All bounty in your sight
For gold it cannot measure
All the beauty that she gives
It is her special way to say
In wealth you always live
Treasure things that fall from sky
Riches never part
The beauty of the gold she sends
Will gather in your heart.~
Posted by Searchfamilies at 09:15 No comments:

Here a Link to My Whitney Crafts Blog

Here is the Link to my Family History Blog